The story of 'Runcorn Linnets Juniors' began in 2005 when Inter Union JFC was born from an idea between two forward thinking visionaries Simon Archer and Jason Maddock, five years later they had managed to build a solid base of nine successful junior league football teams.

In 2010 Inter Union were invited to become part of the Club umbrella at Runcorn Linnets FC and swapped Blue & Black for Yellow & Green.

Established in 1997, Halton Girls JFC have had a similar rise in prominence to that of Inter Union JFC. They flourished during a history of over 16 years prior to joining the Linnets family, providing opportunities for young girls to play football for recognized teams at various levels from 8 to 16 years of age.

Following both the amalgamations of Inter Union JFC and Halton Girls JFC with Runcorn Linnets FC, we now have a combined force of 43 junior boys & girls teams, ranging from U7s right through to the U18s Youth teams. We have over 500 children registered, all predominantly from the Halton Community and some from the surrounding Cheshire Towns. 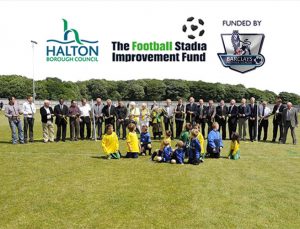 During the 2013/14 season Runcorn Linnets Junior Football Club completed on a 30 years lease for a new fully fenced off and secure home on the playing fields surrounding our Millbank Linnets Stadium. Linnets Halton Sports Complex now consists of a £1.4m clubhouse, café, changing facilities, free parking, 3 x full size pitches, 1 x 9v9 pitch, 2 x 7v7 pitches, 4 x 5v5 pitches and training areas. Planning is under way for Linnets Halton Sports Complex to undergo a 5 year Pitch Improvement Programme (PIP) which will see it become a major asset to the Halton community. Not just by providing quality football playing surfaces and facilities for our kids to use, but an opportunity for mixed sports to be played and coached at the complex too.