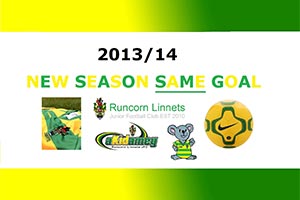 The new season is nearly upon us and here is a roundup of who’s doing what across the Juniors during the 2013/14 campaign.

Daz, Sean and Regan have already started training in preparation for the Halewood Summer League's KO in May 2014. Children wanting to join the squad are asked to attend the aKidamey on Sunday mornings.

Kev and Scott’s boys are playing their 7v7 football in the Belle Vale & District JFL on Sundays as they look to emulate last years success.

We are running two U9s teams this season.

Dan & Pete’s boys have entered Warrington JFL’s Rhinos division on Saturdays, which will provide a higher standard of football.

New boys Mike & Simon have entered a team into the Merseyside & Halewood JFL on Sundays. A very strong league which will help to develop the kids no end.

Rob has strengthened the team and will be competing in Division 1 of the Warrington JFL as he seeks to develop the team by playing a higher standard of football.

New Manager Jordan Lloyd and new assistants Dave Woodward & Adam Moore leads the new look team into the Halton & District JFL on Saturdays and will also be competing in the Merseyside & Halewood JFL on Sundays.

Pete & Ste's new streamlined team are concentrating on Sundays this season as they enter the competitive Merseyside & Halewood U14s league.

Ste and Neil's lads are once again looking to challenge for silverware in the Halton & District JFL.

Andy and his new assistants Dave Newton and Steven Ward have assembled a solid team to challenge for honours in the Ellesmere Port JFL, bringing in 5 new players.