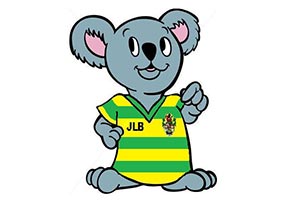 JLB: What is your full name?
DF: Daniel Craig Flanagan.

JLB: What Linnets age group?
DF: Under 7's and aKidamey

JLB: Where were you Born?
DF: Chester

JLB: What is your position at the club?
DF: Under 7s Manager and Head aKidamey coach.

JLB: Apart from Linnets, what other team do you support?
DF: Everton FC

JLB: Where do you see th.em finishing this season?
DF: Let's skip that question, top half will do me.

JLB: Who was your childhood footballing hero or heroes?
DF: Big Dunc an Maldini

JLB: Who was your childhood footballing villain?
DF: Robbie Fowler

JLB: Who in your own opinion has been the best player to have played in the Premier League?
DF: There are a lot, Berkamp, Zola, Beckham, Makelele but for me it has to be Henry!!

JLB: How long have you been with Inter Linnets/Inter Union?
DF: 2 years

JLB: Why Inter?
DF: Was asked to help out at aKidamey and never looked back, it’s an awesome club to be with.

JLB: What was your position?
DF: Left back or centre mid.

JLB: What’s your best & worst memorable coaching moment?
DF: BEST - Seeing my team play how they do each and every week. WORST - Getting knocked out of the Halewood Summer Champions League on pens an seeing all of the tears that followed!!

JLB: Where do you see your jun.ior team finishing this season?
DF: No U7s league but hope they can carry on the awesome form we have had this season.

JLB: If you were Head of UEFA what rules would you add/change?
DF: Remind everyone it is a contact sport, other than that wouldn't change anything; the talking points are what makes this game great!

JLB: Tell us something we don’t know about you!
DF: Guess this should be an interesting fact……..Hmmm ok, can't think of anything so have to go with……I have a real phobia of frogs!! Strange I know.
JLB: Rebit!

JLB: If Hollywood made a film about your life, who would you like to see play the lead role as you?
DF: Robert Downy Jr, an awesome actor.

JLB: What would your last supper be?
DF: Spag Bol

JLB: What would you do if you had a time machine?
DF: Go back and see the dinosaurs

JLB: If you could afford any car what would you buy?
DF: Honestly I’d get an old Capri and bring it to it's former glory.

JLB: If you could trade places with any other person for a week, famous or non famous, living or dead, real or fictional… with whom would it be?
DF: Sep Blatter, that would be fun!

JLB: If you could go on holiday in the morning, all expenses paid where would you go to?
DF: New Zealand

JLB: If you had to be shipwrecked on a deserted island, but all your human needs - such as food & water were taken care of, what two items would you want to have with you?
DF: I’d take my family and a football.

JLB: Have you ever blown a Vuvuzela?
DF: No.

JLB: Just before we wrap up....has your assistant Pete Smith got over the fact that I don’t really exist yet?
DF: LOL ......he still believes that Liverpool will win the league next year so let’s just leave it there!